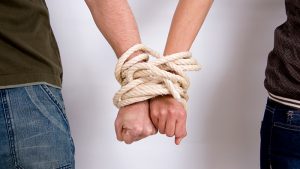 One definition of a codependent is someone who feels responsible for other people’s feelings, problems, and behaviors to the exclusion of themselves. While this isn’t the only definition of codependency, codependents are, in general, willing to sacrifice their own emotional, mental, and physical wellbeing (and even safety) in order to sustain their relationships and take care of their partners and family members.

Of course, as the saying goes, it takes two to tango. It definitely takes two to be in a relationship. And, this type of pleaser/fixer personality is the unfortunate compliment for someone who prefers the role of taker/controller.

While I’ve spent a lot of time discussing the role codependency plays for those of us who are, or have been, in relationships with addicts, people with addictions are not the only ones who “latch on” to codependents or for whom codependents sacrifice themselves…

Codependents often find themselves in relationships with people on the narcissist personality spectrum.

Narcissism is often defined in terms of being the opposite of codependency. A narcissist is said to be someone who is excessively involved with his or her self, who feels entitled and places his or her own feelings, needs, and desires above those of anyone else in a relationship, and who lacks compassion and empathy.

Given all of this, it becomes much easier to see why codependents and narcissists often become involved in relationships with one another…

A Match Made in Misery

Both narcissists and codependents can appear extremely warm, charming, and caring at the outset of a relationship – the narcissist in order to gain appreciation and favor, the codependent to lavish attention.

The codependent willingly sacrifices boundaries, personal desires, goals, and even personal happiness in order to pursue and please the narcissist, who loves the attention and the feeling of being everything and all things to the codependent.

Unfortunately, this initial fairy tale is actually a trap that is doomed to end in misery…

Of course, the codependent now finds himself or herself in an all-too-familiar situation…

Access all 10 modules of the Wake Up Recovery program from your WUR Member Dashboard – including lessons on increasing your sense of worthiness, evolving your perceptions, living a life of authenticity, and how to let go of resistance and attachments – plus the ongoing support you need to overcome your codependent traits, transform your recovery, and create the relationships and life you desire!

It’s often not until the codependent reaches some sort of breaking point that he or she becomes willing to even consider ending the relationship, let alone seek professional help. But some sort of professional counseling or psychotherapy – as well as the support of a group such as Codependents Anonymous or that provided here at Wake Up Recovery – is almost always necessary for codependents to learn how to set healthy boundaries and understand that the only way they’ll ever find or create the relationship they know deep down inside is possible is by doing the healing work necessary to love themselves enough not to get involved in another dysfunctional relationship.

The codependent-narcissist trap is not an easy trap to get out of, but us codependents can break free… As long as we’re willing to ask for help and do the work necessary to learn how to love ourselves!

Have you found yourself in dysfunctional relationships with takers/controllers? Are you still in one? If so, what’s keeping you in that relationship? And, if you’ve escaped the trap, what did it take for you to do so? Be sure to share your thoughts and questions using the comment section below so we can all learn from and help each other…

Take this FREE quiz and find out now...

And, once you're done, be sure to download the FREE EBOOK, The Truth About Codependency! 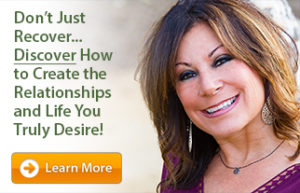